Sunday was my son’s first soccer game, not just first of the season, but first game ever.  He’s five so I anticipated it would be pretty cute to see him out on the field in his “you’ll grow in to it” jersey and matching socks so long that they were only inches from the hem of his shorts.  It was an exciting day and we were all petty pumped to see the game.  When we arrived to the field we found his coach and left him with his teammates.  The team warmed, up while the rest of my family and I took our places on the sidelines.   It wasn’t long when we noticed that the coach was preparing our son for the position of Goalie, which he played for the first part of the game.

The players took their positions on the soccer field and the game began.  That’s when for me the unexpected anxiety began!  I watched as player after player came toward him dribbling the soccer ball between their feet.  What I wish I could say is that as each different player approached the goal area I watched as my son swiftly and deftly defended his turf, but this was not the case.   The opposing team quickly scored a few goals.   As the wild little band of soccer players traversed the field, my son remained in his designated spot and appeared to have no interest in the action happening just feet from him.  He mostly ignored it and instead preferred to scratch his leg… wave at his dad, sisters, and me… look at the goal net…   Soccer game?  What soccer game?

I couldn’t believe how watching the ball coming toward him gave me such a feeling of panic and as I watched the game, it began to dawn on me how much this little ball game was like parenting.  I found myself remembering the times that my mother would try to reason with me about all the typical teenage subjects.  Dating of course was a favorite concern of hers.  I remember the dread every time I had to ride alone in the car with my mom, for fear she would use the car for what I viewed as a mobile torture chamber!  If I think back to those days I can easily remember the pitch of her voice and the way her lips would thin as she spoke with determination and authority with just the slightest hint of desperation.  During the soccer game I began to realize how I was that parent now.

Watching my kids struggle is something I have done a few times over the last 14 years.  I have seen my daughters each take blows from life that would take the breath of even the greatest athlete.  I have seen them struggle with issues far more adult than their own years.  I have felt protective, but mostly for them the things they face are not things they have brought upon themselves.  This little game was just a tiny taste of what I’m sure my mother was swallowing whole on those car rides.  She could see her player in the game of life.  She had been to many a ‘soccer’ game and knew a bit about how it was played.  Seeing me in charge of guarding the goal, it was hard for her to stay on the sidelines and let me experience defeat.  It wasn’t that she didn’t have confidence in me, it was that she knew that at some point everybody misses, everybody looses focus, everybody… looses.   She knew these things because she had lost a few times too.  And I have.  And he will.   Somehow we all make it! 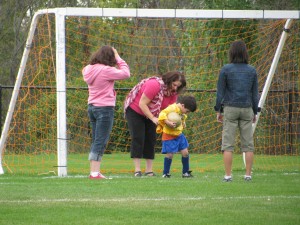 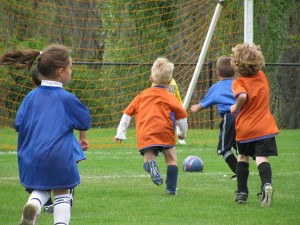 The Moment Anxiety Set In...

Maybe we should explore the Martial Arts? 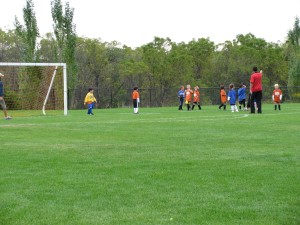 What I’m Writing About